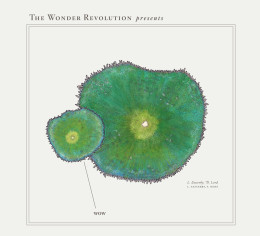 WOW is the latest release from The Wonder Revolution and finds guitarist David Lord collaborating with brilliant cult pop artist Les Easterby (The World Palindrome, The World Palestine, And Academy). The story of wonder established on earlier albums such as Dots and The Forest Meeting continues with this new collaboration. Lord expands his musical vocabulary by focusing on alternate guitar tunings across the release, his melodies and lines filled with a new beauty and brilliance. Although he’s long been considered a guitar master in his native Kansas—and accolades from Alternative Press, Surviving the Golden Age, Drunken Werewolf, Magnet, Under The Radar and Beats Per Minute further this belief—this new material firmly establishes Lord as an exciting and unique voice in the world of music. Gone are easy comparisons to artists such as Pat Metheny, Jeff Parker and Sam Prekop. Here, Lord arrives as a voice other artists will seek to emulate.

Teaming with Easterby, Lord says, was a natural fit. The longtime friends both possess singular voices in their hometown but their blending on this new release is remarkable. Fans of Easterby’s acclaimed Particularly Hello (recorded as The World Palindrome) will marvel at his abilities on WOW while others might ask why this collaboration didn’t happen sooner. Both musicians approach wondermusic with a sincerity and reverence that is refreshing in an age of shock and irony and which enhances the music’s timelessness. Drummer Nathan Wilder (The Appleseed Cast, Paper Airplanes) joins the duo on several tracks, adding to the album’s impressive array of musicianship.

all songs by Les Easterby and David Lord