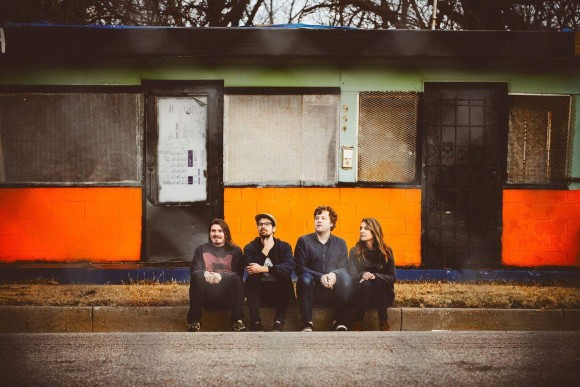 Since its inception in 2010 The Travel Guide has earned a reputation for rousing live shows and smart, dynamic songs have grown the quartet a loyal following in the Midwest, but now, with the release of the album Trading A Dream, the Kansas collective has added an extra arrow to its quiver. Featuring tunes honed to a fine point on the stage, the album is a rare-commodity: tuneful yet tinged with hints of the experimental, smart but unpretentious, new but familiar and loaded with unforgettable compositions from one end to the other. The dual guitars of Thayne Coleman and Kristyn Chapman are a touchstone of the band’s sound, recalling acts such as Television and Nels Cline-era Wilco, as evidenced by the balance between the refined rhythm and lead work of tunes such as “Hockey Night,” “Benediction” and “Lives Like Climates.” The pair’s intricate and imaginative playing comes to the fore on material such as the delicate and brilliant “Bastard Architecture,” “Everyone’s An Expert” and “Folk Devil.” Drummer Will Erickson adds deft touches to the record, balancing propulsive rhythms with playing that is sensitive to melody but never less than powerful for it as heard on “Dogs and Crooked Cops,” “Hubris” and longtime live favorite “Benediction.” Coleman’s unique vocal style and thoughtful lyrics are equally remarkable and the perfect finishing touch to music that is wide-ranging and imaginative. The band is joined in the live setting by bassist Caleb Drummond, whose friendship with the band reaches back to its earliest days. Produced by Air House Records stalwart Micajah Ryan (Bob Dylan, Megadeth), Trading A Dream is already setting the template for the future of music from America’s heartland.