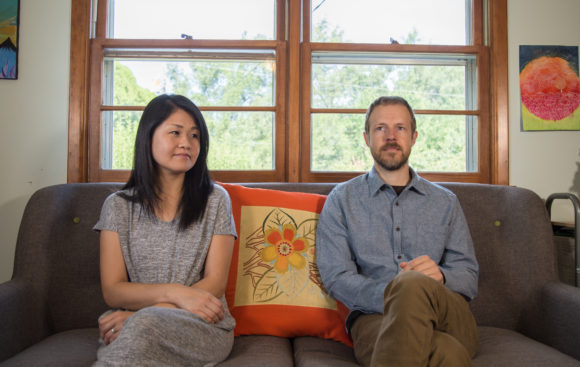 David Lord (Francis Moss, The Wonder Revolution) returns with another imaginative and wide-reaching musical project that will please lovers of adventurous music everywhere via Miki Moondrops. The trio’s debut album, Vegetable Head, features Lord on a variety of instruments including synthesizers, bass, accordion and, of course, guitar. He’s joined by sometime collaborator Benjamin Snook (In Vivid, SIGHS) on electronic percussion and Miki Masuda, who makes her vocal debut on the album.

Known as a formidable jazz bassist in her adopted hometown of Wichita, Kansas, Masuda is Miki Moondrops inside the world of wonder that Lord has created. Her vocals are the perfect match for the effortless, otherworldly pop of “Fred Hats,” “Woodpecker Sparkles” and the title track. Although there are touches of post-rock, jazz futuristic pop and glitch-laden passages that call to mind 8-bit, the music of Miki Moondrops maintains its own, rich character, virtually peerless in an industry flooded with acts intent on copying and exploiting the norms of various genres.

Vegetable Head is the soundtrack of your childhood dreams, of fairy tales yet untold and a life filled with possibilities and, yes, wonder.

On Fuwa Fuwa Music (2019), the trio of Masuda, Lord and Snook become a quartet with the addition of Will Erickson (Team Tremolo, Cartwheel) on drums. As the world of Miki Moondrops becomes more vivid and mature, the sounds become more analog and real. If Vegetable Head was the initial excitement upon entering the world of Miki Moondrops, Fuwa Fuwa Music is the feeling of this magical world becoming home.